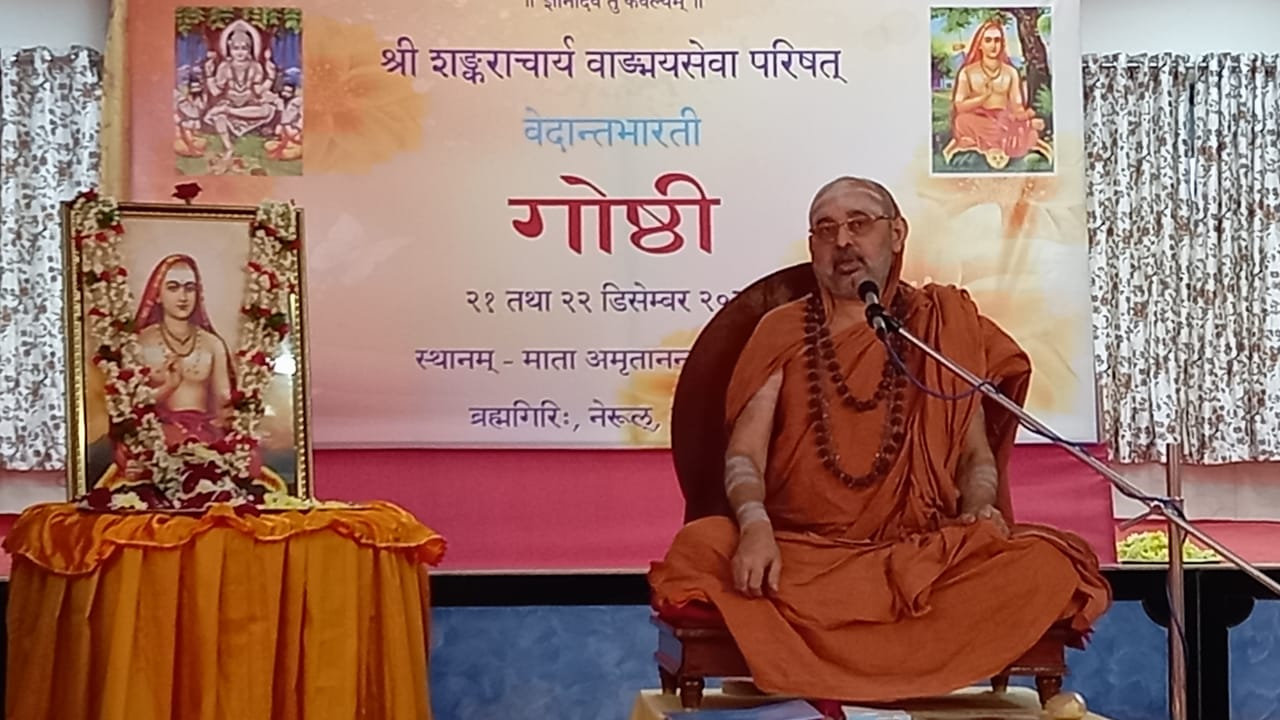 Representatives of the institutions following the tradition of Sri Shankara Bhagavatpadacharya, Mandaleswars and other Swamijis led by Sri Shankara Bharathi Swamiji of Yadathore Sri Yoganandeswara Math, K R Nagar, Mysuru District, Karnataka met the Hon’ble Prime Minister of India, Sri Narendra Modiji today and appraised him of the proceedings of the meetings of the Sant Samaj held in Sringeri, Haridwar during the Mahakumbhamela, and Mumbai.

They wholeheartedly congratulated the Hon’ble Prime Minister for taking up unprecedented works of reviving the sacred places, consecrating the memory of Sri Adi Shankaracharya by installing the idols in Kedar, Varanasi and speaking often about his greatness and the message he has given.

The highlight of the talk was about the establishment of Sri Shankaracharya Vangmaya Seva Parishad involving all the institutions owing allegiance to Sri Shankara Bhagavatpadacharya for the propagation of the Ekatmatavad (Oneness) /Vishwatmatavad (Universal oneness) of the Upanishads as delineated by Sri Shankaracharya. The intention of the Parishad to organise mass movements of chanting of Stotras like Soundaryalahari, Dakshinamurthy Ashtaka all over the country, publication of leaflets and books in all languages carrying the message of Ekatmatavad, organising lectures etc. was conveyed to the Hon’ble Prime Minister. He was also informed of the overwhelming positive response from Sannyasins, institutions and individuals in all places where the proposal has been conveyed during the yatra of Sri Shankara Bharati Swamiji.

The impact of Sri Narendra Modiji’s participation in the mammoth Soundaryalahari mass chanting held in 2017 at Bengaluru organised by Vedanta Bharati was also brought to his notice.

The main focus was on establishing an International Institution of Study and Research in Advaita and other Systems of Indian Philosophy and a shrine for Sri Shankaracharya at Ayodhya, the evolving spiritual centre. He was informed of the efforts by Vedanta Bharati, an institution that has promoted the Parishad, to acquire land in Ayodhya for this purpose. Hon’ble Prime Minister actively and attentively listened to all the proposals and expressed his appreciation for the efforts being made by the Sant Samaj for spreading the message of Oneness at the present time when divisive forces are active in various forms. He recalled the greatest of the saints, Sri Adi Shankaracharya as the living example of uniting force and paid his homage in glowing terms. He extended his wholehearted support for the cause the saints have taken up in uniting the society through spiritual means.