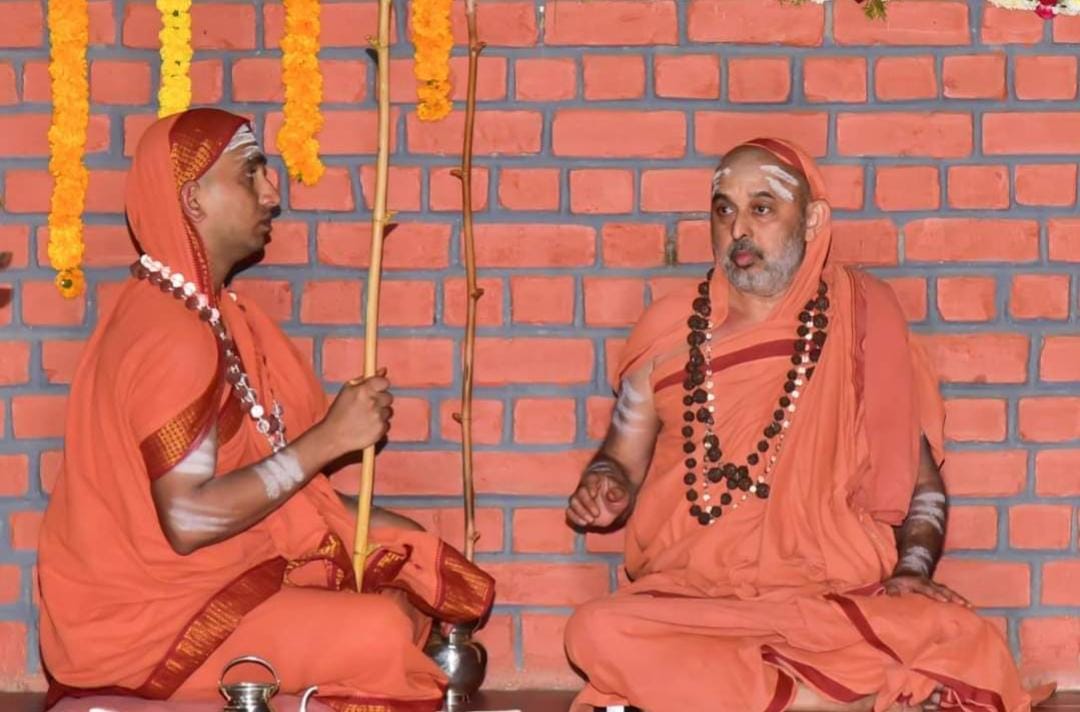 As per the guidance and blessings of Jagadguru Shankaracharya’s of Sringeri, Uttaradhikari Shishyasveekara will be held on 17-2-2021 at, Japyeshwarakshetra (Japadakatte) K R Nagara Taluk, Mysore District.

Jagadguru Sri Shankarabhagavatpada propagated the Advaita Philosophy, which is based on Upanishads. Acharya, established the four Amnaya Peethams more than twelve centuries ago to foster the sacred tradition of Sanatana Dharma. Dakshinamnaya Sri Sharada Peetham, Sringeri, is the first and the foremost of the four Peethams, with an unbroken lineage of Guru Parampara. Meanwhile, With the blessings and guidance of the Jagadguru’s of Sharada Peetham many maths were established to propagate Advaita Philosophy.

The event was hosted for 3 days. You can find the related information from below links.

Yadathore Sri Yoganandeswara Saraswathi Math is one among those, the math was established 800 years ago, on the banks of the holy river Kaveri by great ascetic and a yogi, Shri Shri Yoganandeshwara Saraswati Mahaswamiji. Several ascetics of Advaita tradition have decorated the peetha of the Math so far. The name of Shri Shri Ramabrahmananda Mahaswamiji stands out even among these names, as an accomplished Sadhaka, and a Jivanmukta. This institution has been contributory in the Spiritual, Religious, Cultural and Social Spheres.

Sri Shankara Bharathi Swamiji, the present Peethadhipathi, was initiated in to Sanyasa in 1995 at Sringeri with the being blessings of Sri Sri Jagadguru Shankaracharya Sri Bharathi Teertha MahaSwamiji of Sri Sringeri Sharada Peetha, by Paramahamsa Sri Yogananda Bharati Swamiji. Since then, Sri Shankara Bharathi Swamiji, is following the doctrines of Sannyasa dharma. He established Vedanta Bharati with the blessings of Sringeri Jagadguru, and has carried out numerous activities, events to spread the teachings of Adi Shankara to the masses.

To continue the long-cherished heritage and lineage of the math His Holiness Sri Sri Shankara Bharathi Mahaswamiji with the inspiration and divine grace of the presiding deity, is set to appoint an appropriate successor for the math. Sri Swamiji, submitted this at the louts feet of His Holiness Jagadguru Shankaracharya Sri Bharathi Teertha Mahaswamiji and His Holiness Jagadguru Shankaracharya Sri Vidhushekara Bharati Mahaswamiji of Sri Sringeri Sharada Peetham, and seek their blessings. The Jagadguru’s blessed the selection made by Sri Swamiji, Brahmachari, Sri Bhaskara Sharma, who has the desired qualities to be initiated to Sannyasa and to be named as his successor.

Brahmachari,  Bhaskara Sharma, is the son of Srimathi Gayatri and Sri Sathyanarana Shastri, the pious family is ardent devotees to the math. Since his childhood days Brahmachari, Bhaskara Sharma was a disciple of Sri Swamiji and was very actively involved in various activities of math and Vedanta Bharati.

As per the guidance and blessings of Jagadguru Shankaracharya’s of Sringeri, Uttaradhikari Shishyasveekara will be held on 17-2-2021 at, Japyeshwarakshetra (Japadakatte) K R Nagara Taluk, Mysore District. Devotees are cordially invited to this auspicious Mahotsava to proffer our pranamas and seek divine blessings.

Series of rituals in connection with Shishya Sweekara Mahotsava began with grandeur.

Gana Homa:  Ganapati is the remover of all obstacles. Any new beginning is made by praying Lord Ganapati seeking an obstacle-free path.  Gana Homa performed as part of the event, His Holiness Sri Sri Shankara Bharathi Mahaswaiji, graced the Poornahuti.

Bhasya Parayana : Vedanta Bharati, arranged Prasthana Traya Bhasya Parayana – Reading of Bhagwan Adi Sankaracharya’s commentary in original Sanskrit on the Upanishads, Brahmasutra and the Bhagawad Gita. Highlighting the importance and relevancy of Sanyasashrama, by eminent scholars of the country.

Ashta-Shraadha
The successor-designate, Brahmachari Bhaskara Sharma,  performed the Ashta-Shraadha ceremony.  This ceremony is performed to free oneself of the three runas (debts) towards the Devas, Rishis and Pitrus. The Brahmachari made offerings to 18 Vaidika Brahmanas and sought their blessings.

Book Release and Discourses
In connection with the Shisya Sveekara Mahothsava, to spread awareness about the Sanyasashrama, also known as Turiyashrama, the greatest among the four asharmas, Vedanta Bharati has released a book, ‘Paramahamsaparamyam’ , a collection of Sri Shankarabhagavatpada’s sayings about sanyasa from his works.

Bhasya Parayana – Reading of Bhagwan Adi Sankaracharya’s commentary in original Sanskrit on the Upanishads, Brahmasutra and the Bhagawad Gita. Highlighting the importance and relevancy of Sanyasashrama, by eminent scholars of the country concluded by noon.

The ceremony began at 6:30AM with the Brahmachari performing the Purusha Sookta Homa and Virajaa Homa at the yaga shala.

At 8:15 AM the Brahmachari proceeded to the banks of river Cauvery and performed Preshochaarana and Sarva-bhoota-abhaya Pradhana — a vow of non-violence towards all beings.  He then discarded his clothes, sacred thread and tuft as prescribed in shastras.

Shishya Swamiji then performed the Paryanka Shaucha ceremony and joined his Guru in the temple. In the midst of the event Viraja Mantra was chanted by the eminent scholars and a brief Vidwat Gosthi was arranged to impart the significane of “Thuriyaashrama”.

Later the Guru and Shishya Swamiji had Darshana of Lord Japyeshwara, Sir Adi Shankaracharya, Goddess Sharadama, Yogamba and other shrines in the premises of main temple.

At 4 PM, Guruvandana Sabha began with the Devine presence of their holinesses, , Sanyasis, Mathadhipatis from various parts of India and with esteemed presence of Deputy Chief minister of Karnataka State.

The Sabha began with Vedha gosha, and discourses by various swamiji’s present. The Deputy Chief Minister Sri Ashwath Narayana released a book “ Sureswara Varthika Bashaanuvada “ to mark the occasion. Sri H Vishwanath, Former MP was present at the event and gave vote of thanks on behalf of the Sri Mata.