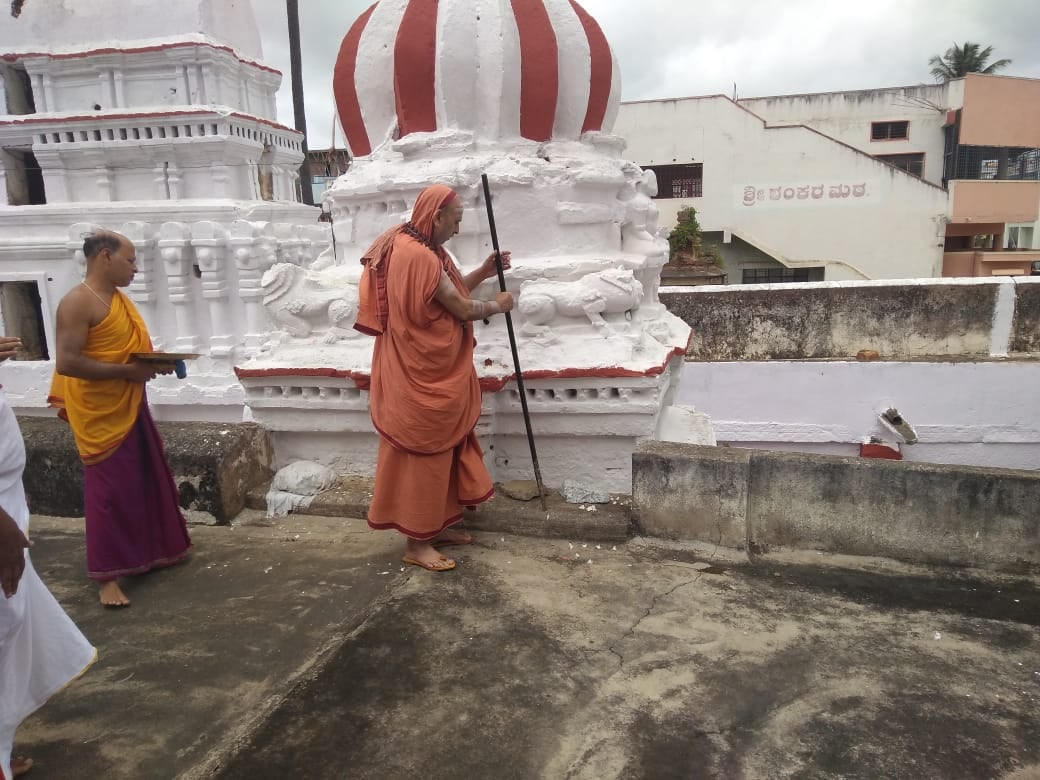 With the Anugraha of Aaaradhya Devatha and Jeevanmuktha Sri Sri Ramabrahmananda Saraswati Mahaswamiji, His Holiness Sri Sri Shankara Bharati Swamiji has taken the saklapa for Jeernoddhara of temple premises at Holenarasipura.

Sri Shankara Bhagavatpadacharya is one among those who were incarnated to resurrect the Sanatana Dharma. Advaitha is the doctrine rejuvenated by Him. Yadatore Sri Yogandeshwara Saraswathi matha in Krishnarajanagar, Mysore District on the banks of Kaveri is one of many institutions that follow Sri Shankara’s tradition. This institution has been contributory in the Spritual, Religious, Cultural and Social Spheres.

Around 800 years ago, Shri Shri Yoganandeshwara Saraswati Mahaswamiji, a great ascetic and a yogi, established a Math in Krishnarajanagara Taluk of Mysore, on the banks of the holy river Kaveri, to support practice of Vaidika Dharma. The Math came to be called as Yadathore Shri Yoganandeshwara Saraswati Math. Several ascetics of Advaita tradition have decorated the peetha of the Math so far.

The name of Shri Shri Ramabrahmananda Mahaswamiji stands out even among these names, as an accomplished Sadhaka, and a Jivanmukta. His work, the ‘Tattvasangraha Ramayana’ is an illustration of his erudition. In the fifteenth century, Shri Shri Ramabrahmananda swamiji established a branch of the Math in Holenarasipura, and installed the presiding deity Shri Chaturbhuja Pattabhirama. He also built a temple of Shri Nilakantheshwara. Puja has been offered constantly to both, as though to highlight no-difference between Hari and Hara.

The temple structure are very old and needs a revamp, with the blessings of His Holiness Sri Sri ShankaraBharathi Mahaswamiji devotees are determined to renovate the temple. His Holiness will initiate the construction  through a ground- breaking ceremony on Thursday 29-10-2020 (Ashwayuja Shukla Trayodashi).